Checking in for our flight at 7am, it was busy at the international airport and the three hour wait went by really quickly (after I went through trying and testing nearly every eyeshadow at Urban Decay). We were pretty pleased with ourselves when we got reassigned the exit row seats after asking our flight attendant ever-so-nicely. But we soon decided that we should’ve asked for a business class upgrade because our flight was quite empty – we even had a seat between us to share as a table. The extra space made the flight much more comfortable but I think the reason that it was so empty was because of the timing. There is only a three hour difference between Sydney and South East Asia so it was really confusing having to wake up to board the flight, then get served dinner, go back to sleep, wake up to another dinner (or lunch?) to arrive for dinner time… Anyway

We arrived in Ho Chi Min City with just ten minutes to make our connecting flight. Loaded up onto a bus straight off the plane, we were driven about 1km to the arrival gate and then had to go back through everything again and walk back to the gate that our plane arrived at. It was no trouble though, going through security/customs was much more relaxed (we actually just walked straight through the machine and got called back by a little lady in a suit with no shoes on go go through again and actually take our bags off… she also did briefly look at our tickets). We made the connection and went on our way to Bangkok – not before being served another dinner …

Bangkok airport really has the arrival ambiance down pat. The airport is enormous and modern and full of people. We got through security and customs quickly but spent about 15 minutes waiting for our flight to come up on the baggage collection screen. It would switch between Thai and English so quickly and with four screens that switched information twice before changing languages. After we decided for Jono to take the left two and I take the right two and we just looked for our flight number we found it in about five minutes.

Departing the airport was an experience too. Walking out the air conditioned doors – the 35•C just totally smacks you in the face. The other thing that gets in your face is the hundreds and hundreds of giant glowing billboards along the straight road into the city. I was in my element being entertained by all of these obscure brands that had these enormous 10 meter high billboards on a main highway. I actually got a headache on the way in and Jono advised me to stop reading all the ads and just look at them.

He was in his element as well with loads of Izuzu and Ford Utes on the road, he was pointing out all the brand new models and modifications that were driving around here that he could be selling for up to $70k at home. He said that the factory is in Thailand and I asked “if we visit it, can you claim this as a work holiday?”

We arrived at our accommodation, Nouvo City Hotel, in the Banglumphu area at around 9pm. It’s really quite flash, nice and modern and the staff were really lovely but the beds are seriously hard! Thanks uncomfortable bed for bringing you this blog post.

Our first stop was Khao San Road, just around the corner… For our fourth dinner 😂. The lanterns, powerlines, advertising, people, scooters, street food and neon lights make it a seriously cool experience. I can understand how people fall in love with Bangkok.

Khao San Road sells every kind of street food, clothes, paintings, books, fake DVDs and fake IDs. Walking through at night we had offers of BBQ insects, back alley massages, back alley suit fittings, buckets of alcohol, tuk tuk rides, ping pong shows and several different drugs. We settled on dinner and a spa pedicure around the corner instead. 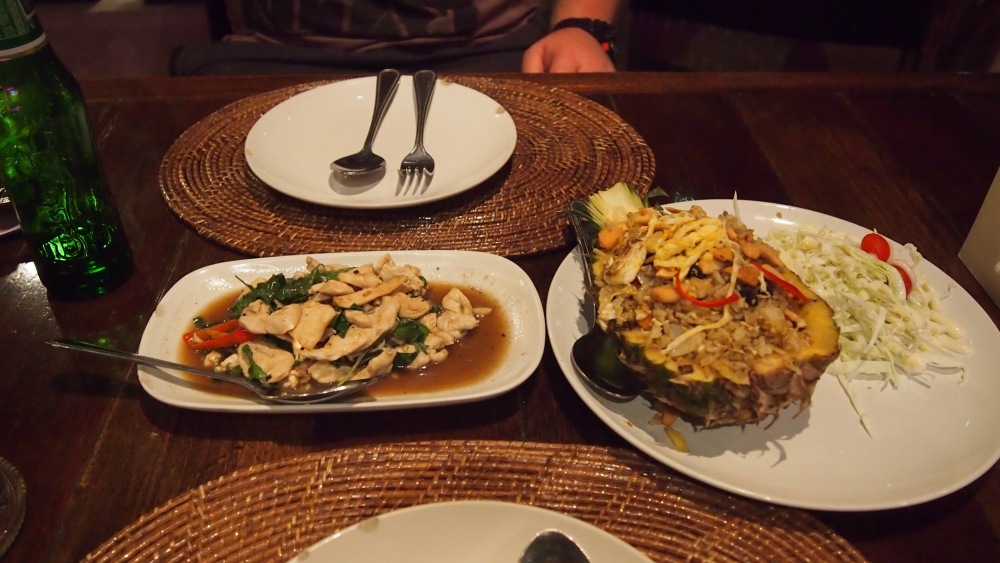 We ate at the Maceroni Club and listened to the likes of Cold Chisel and Pearl Jam being sung with a tambourine before enjoying a coconut ice cream walking back up the road. 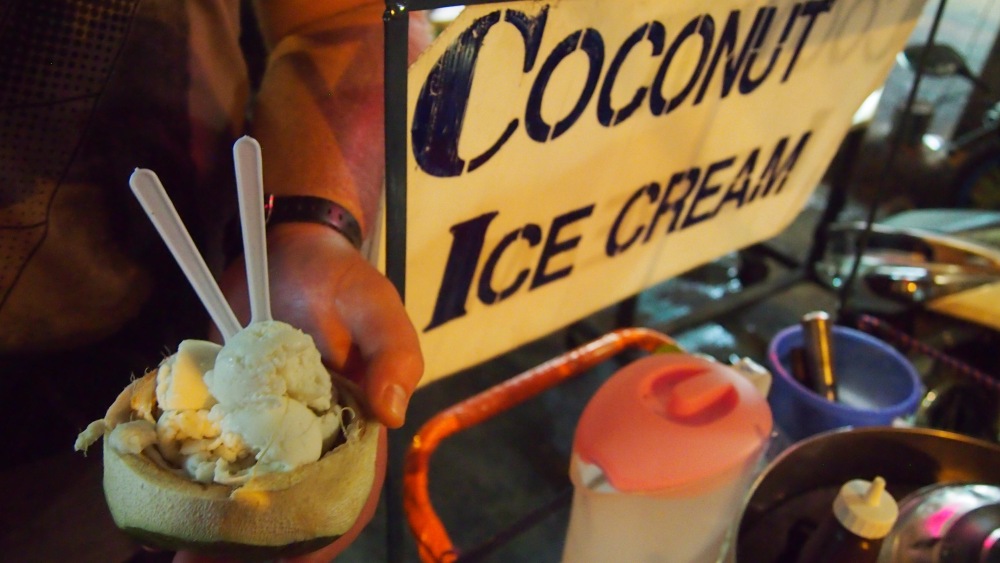 After dinner, we went and got a spa pedicure for about $20, which was desperately needed and very luxurious and then headed back to air-conditioned comfort of the hotel. Jono stopped at the 7/11 on the walk back to get smokes, drinks and a snickers but it was all forgotten because as soon as he laid down he was asleep.

Nothing planned yet for tomorrow, I was hoping to go for a tuk-tuk ride to the flower markets but we will see if I ever fall asleep!

This blog post is a part of a series I wrote while on the Contiki Asian Adventure Tour.