We climbed back in a bus seat to take the meandering ride on to Chiang Rai. But first, we made an interesting pit-stop.

Cabbages and condoms, self-dubbed “the rubber triangle”, is located between Chiang Mai and Chiang Rai. It’s a community-centre-come-roadside-diner that provides services and education for locals, promotes environmental protection, and, of course, some sex education too. Perfectly timed for toilet and iced coffee stop, we took a look around the modest gift shop of handicrafts and curious Thai innovations and inspected some of the speciality local items on the menu like red ant egg salad – I picked the less adventurous Basil Lay’s Chips. 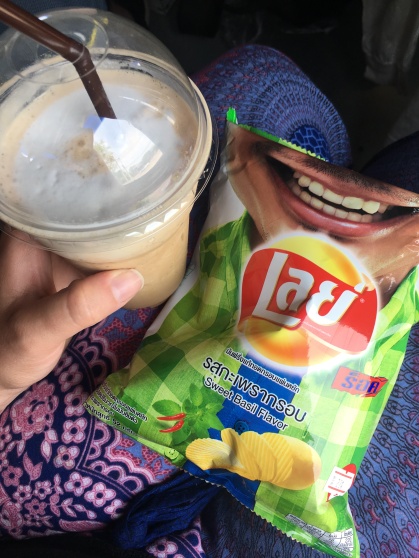 This stop piqued my interest, particularly because we were getting very close to the actual Golden Triangle. The Golden Triangle gained infamy in the 20’s as the area between Thailand, Laos and Myanmar – where most of the world’s opium (which makes heroin) is produced. As you can imagine, there is a lot of money and drugs travelling these windy roads. So why were most farmers in this area (and those who are growing poppies for opium production) living below the poverty line?

About 5km before arriving at Chiang Rai, perched upon the top of a rolling green knoll, we visit Wat Rong Khun aka The White Temple. Designed by a visual artist, this is one of the kookiest, peculiar but also mesmerising places we saw on our trip. It’s beautiful and detailed and creative and absolutely a labour of love. It’s also got a garden of disembodied hands and the temple that you aren’t allowed to take photos of is mostly pop-art styled paintings of Buddha (I mean like Rick and Morty as monks). But for about $4 dollars entry – worth the visit and some.

The afternoon was filled with a visit to a “Hill Tribe”. This trip was nearly as weird as the White Temple. Pitched to us with words like “ethical”, “informative” and “authentic”. Not even close. Imagine the following scenario; arrive in a car park, surrounded by half-kept trees, litter, and poorly-maintained faux rock landscaping. Be taken into a similar faux rock cave and told a story about not really anything, while looking at posters that are too faded and peeled back to get their message across. We then walked single file around a dirt loop down the opposite side of the car park (and as equally unnatural) to gawk at people who were in the middle of undressing themselves from Hard Rock Cafe T-shirt to hastily put on “traditional” hill-tribe attire and then peddle their “handmade” merchandise and ask for more donations. The words I would choose to describe this experience would be “human zoo”.

I planned to recover at the Night Bazaar (just by the green line bus stop) this evening but my nap got the better of me.

This blog post is a part of a series I wrote while on the Contiki Asian Adventure Tour.